The Cogswell’s Grant house marks my 22nd Historic New England home visit – woot woot! And, while I’ve known this for quite some time now, I’m not going to make my original goal to hit all 38 Historic New England homes before November 7, 2019. I was hoping for some sort of time warp, or maybe the  addition of 5-10 extra weekends this year so I  could make it happen – but, I simply ran out of time! I mean, I’m still pretty proud of hitting 22 and the insane spreadsheet that I made at the beginning of the year that kept me organized and allowed me to stay somewhat on track. The good news is that I certainly didn’t plan to stop visiting homes after hitting that goal, so I  can simply keep going! And the better news? I’m going to jolly ol’ England on vacation in the next few weeks – so you’ll have a few posts of the The Historic Old England Project home visits coming your way! (Warning: I have a royal obsession with The Royal Family. Consider yourself warned!) 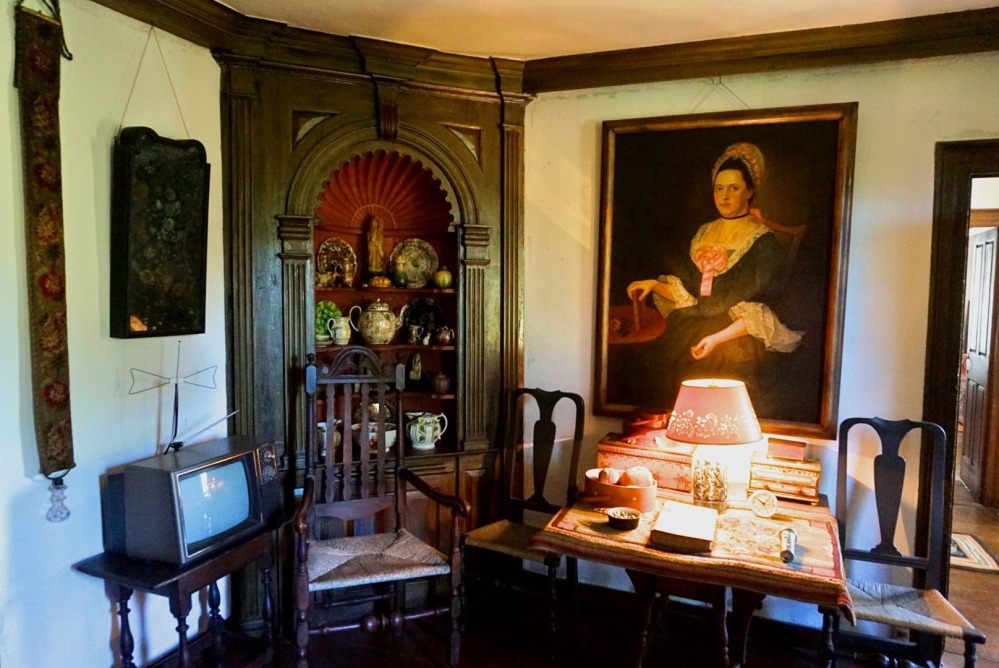 Nina went full out to research the ‘original’ colors in each room, and she was pleased to find this earthy green above the fireplace in the front parlor (the color reminds me of the tavern in the Gilman Garrison House!). While the amazingly intricate corner shelf is not original, it surely is a beautiful way to show off some of her collections! The TV is a bit of an antique itself these days, it is a testament to the fact that they truly did live with their collections – not just tip-toeing around them!

There is in fact a small, updated kitchen with refrigerator and some updated appliances, however I like to call this room the kitchen instead. With its huge fireplace and all the warm colors of the large pottery collection, it just feels like a really cozy space.

This is where Nina did a lot of her research & cataloging of her collection  – such a great little space! Her collection of bird decoys spreads out into the rest of this home from here, but I’m sure she spent countless hours here putting together their pieces of folk history. 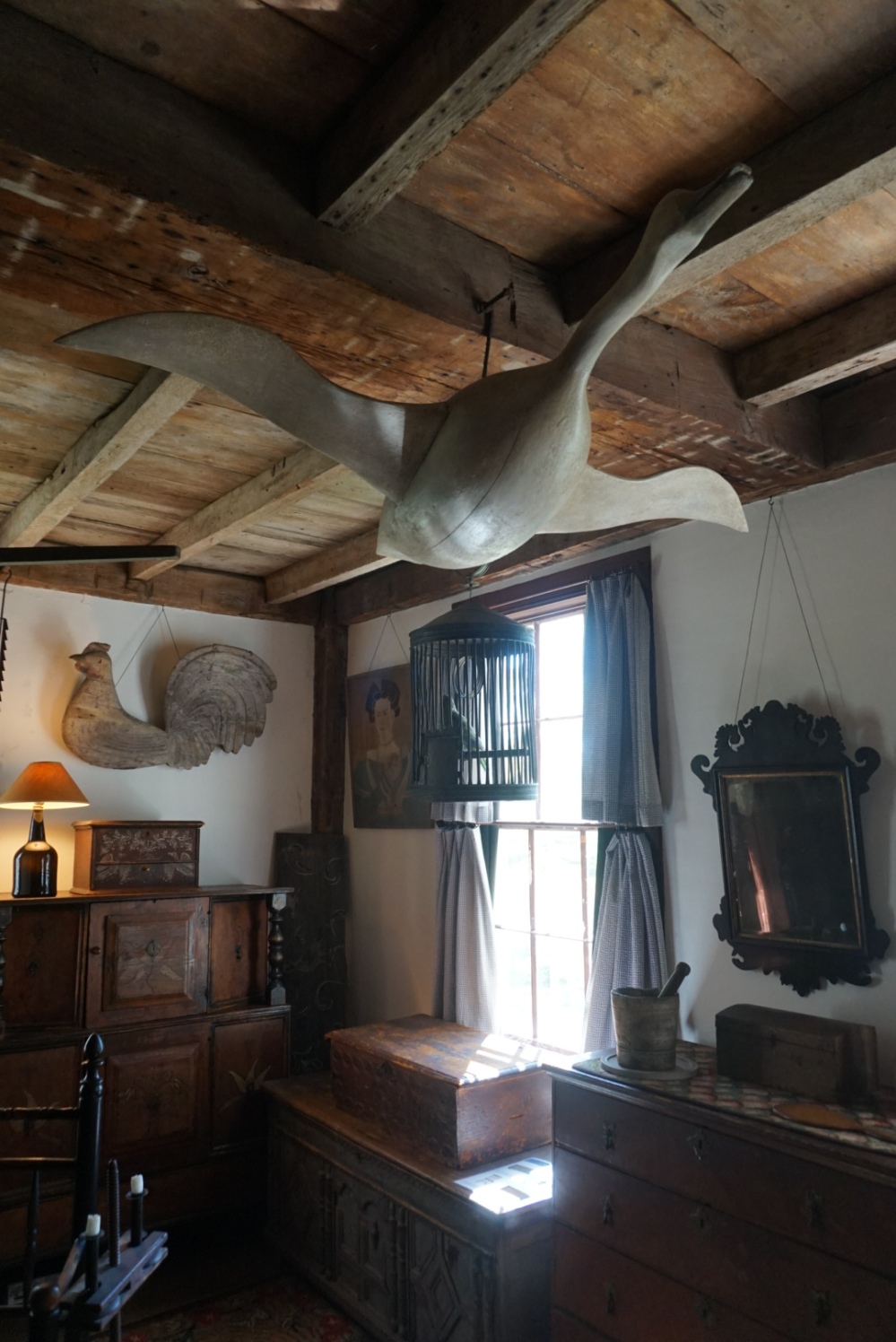 This room is the only one in the house that feels a little staged, a little museum-y – but I think it may have been designed that way! Everywhere you look – the floor, the walls, the ceiling, the bed! – are important pieces of their collection. 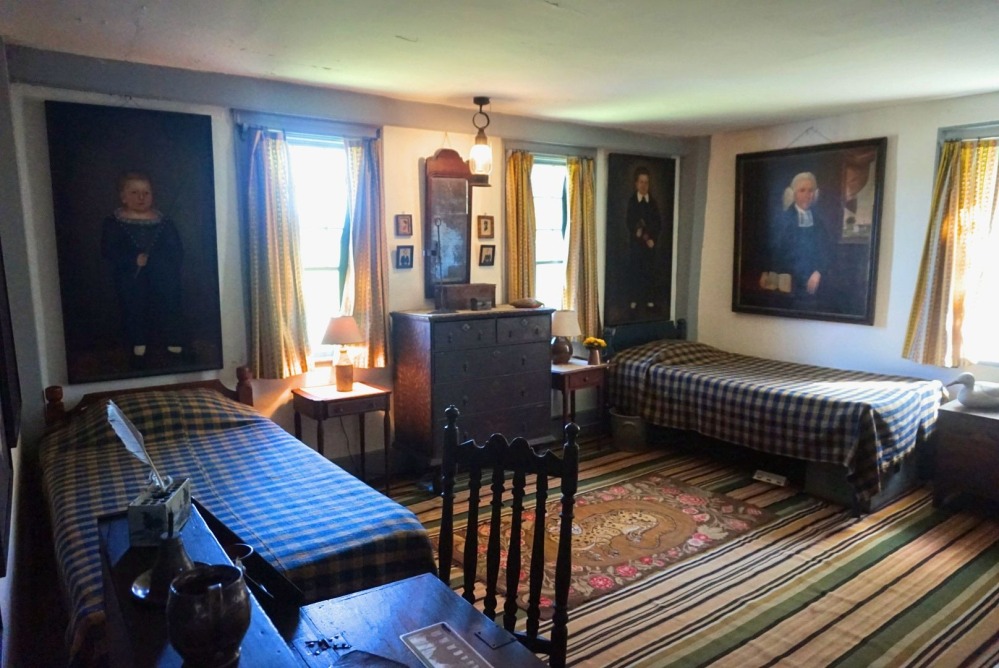 Renny was their son, and there were some really interesting pieces of artwork in this room – 5 of which would have totally creeped me out as a child (and likely as an adult, too). There are six large portraits, five of which are all members of one family. Nina loved being able to make connections between her antiques and real life events, researched and eventually visited the gravestones of those five people and took a photo to bring back to keep in the room with the paintings. ………Interesting.

Below are some of my favorite shots of the Cogswell’s Grant House but I’ll be sharing more on our Facebook & Instagram pages! Enjoy!