Images of a steamboat chugging down the muddy brown water of the Mississippi River is the first image that comes to mind when I hear “Mark Twain”, followed by his infamous all white suit, thick eyebrows and mustache. Hartford, Connecticut however does not come to mind. I was so very surprised to find out that Samuel Langhorne Clemens,  otherwise known as Mark Twain, had resided in a beautiful home there, which is where he wrote The Adventures of Tom Sawyer and Adventures of Huckleberry Finn. Once I realized the house was open for tours, I set out to Hartford for a day trip!

Architect Edward Tuckerman Potter designed the home for the Clemenses,  decorating the facade with brilliantly colored bricks in bold geometric patterns with lots of elaborate woodworking. The 19-room home has been identified as “Picturesque Gothic”, but there are many elements of the “Stick Style” as well. It’s ornate, intricate, and simply gorgeous. I highly recommend walking around the entire home, as from every angle there are new details to notice. Just wait until you get inside!

One thing struck a cord with me in this room instantly – the wallpaper. My grandfather kept bees, and when I was a little girl nothing was a better treat than him bringing me a giant hunk of honeycomb. During what would be the last Thanksgiving with my grandfather, this memory of the honeycomb somehow came up. He got up in the middle of dinner and brought me back a hunk of that sweet honeycomb, and had such a huge smile on his face. I’ll never forget that. So, walking into this room that was entirely covered in bees was not only sentimental, but also so pretty. I’m obsessed and ready to cover the walls of my home in bees too! This was known by guests as “the best guest room in the house” – and I would completely agree with that statement! 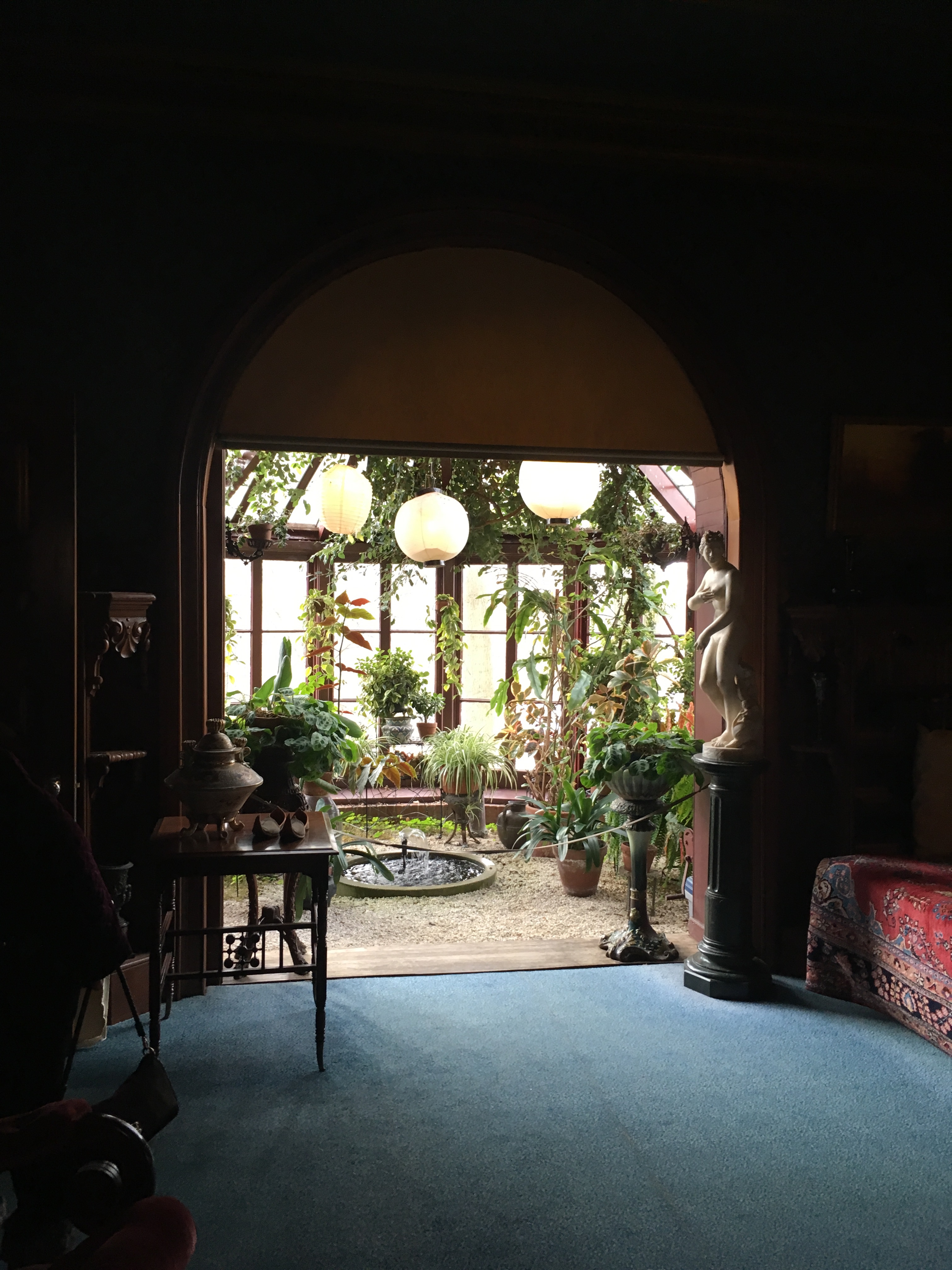 Just off the family room sits this beautiful conservatory area. As soon as you enter the home you can hear running water, not yet knowing where it comes from. Moving through the front parlor and the dining room, you eventually find yourself in what was a living room and library with this gorgeous connected conservatory. The remainder of the room, and majority of the first floor, is decorated in very dark wood tones and wall coverings, so this light, bright greenery is a welcome sight. Plus, who doesn’t want a water feature inside their home?

On the third floor you’ll find where Samuel Clemens transitioned into Mark Twain. This billiards room was, of course, used for entertaining guests (there was even a lovely guest bedroom next door in case the game ran late or you enjoyed yourself a bit too much and wanted to spend the night). However, after the arrival of the third daughter and an eventual need for a nursery and schooling area for the girls, his study on the second floor was re-purposed and he started to use this room as his office instead. It is said that he took his writing seriously in the sense that he was not to be disturbed often from 9 am – 5 pm, but that after “work hours” it was family time. He would often read to his wife and daughters that which he had written during the day, or if it was inappropriate for his daughters his wife would read it silently while they watched intently for her reaction. The Adventures of Tom Sawyer, Adventures of Huckleberry Finn, A Connecticut Yankee, King Arthur’s Court  and more were all worked on in this very room. As you can see from above, notes and musings are strewn on the pool table, as would have been the case when he was writing. There are two balconies off this room, allowing for tons of natural light, and an easy escape for him to smoke as many cigars as he’d like without upsetting his wife by smoking in the house.

Below are some of my top photos, but I’ll be sharing more on our Facebook & Instagram pages as well! Hope you enjoy and plan a visit yourself soon!